Résumé
Most invasive cortical brain-machine interfaces rely on the decoding of fixed patterns of activity in the primary motor cortex. To do so, they actively bypass the physiological learning capability of the neurons. This approach lacks long term robustness and fails to take advantage of the possibilities offered by neuronal learning. To address these issues, Luc Estebanez and colleagues have established a novel murine closed-loop interface that relies on neuronal plasticity to learn to control a tool and solve a task (Abbasi et al. 2018). It incorporates optogenetic feedback that closes the brain-machine interface loop by providing sensory feedback about the state of the system (Goueytes et al. 2019). Using this bidirectional BMI, they have identified a set of physiological constraints that must be met to efficiently convey information to the rodent in the context of sensorimotor learning (Abbasi et al., submitted). The use of neuronal plasticity as well as optogenetic feedback opens up many opportunities but also challenges that should be addressed through control theory. Collaboration between Luc Estebanez (Neurobiologist) and Antoine Chaillet (Control theory) will allow us to move beyond the simple linear control that we have applied so far. We will: (1) Optimize the algorithm that translates neuronal activity into actuator movements. Preliminary data suggests that speed-based control is radically more efficient than acceleration-based control. (2) Identify ways to modulate the rate of learning in the system and in particular limit plasticity once performance has reached a plateau. (3) Develop the control system of a pre-existing miniature prosthetic robotic mouse arm and use it to study the impact of (1) and (2) on prosthesis embodiment. Through our collaboration and the co-direction of a PhD student we will develop these three axes by combining modelling and experiments. 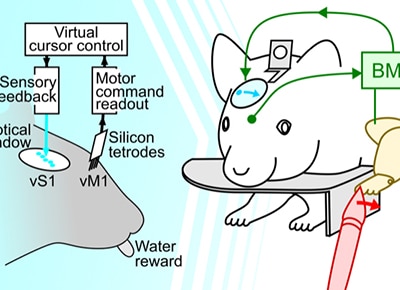